Windmill appearance before House of Commons 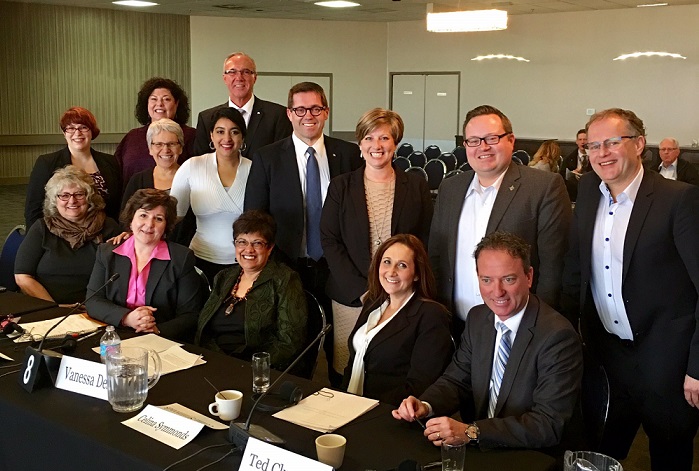 Windmill Microlending, formerly Immigrant Access Fund, appeared before the House of Commons’ Standing Committee on Human Resources, Skills and Social Development and the Status of Persons with Disabilities as part of its study of poverty reduction strategies. Below is the full statement delivered by Vanessa Desa, Vice-Chair, with Dianne Fehr, Vice President, in Medicine Hat on February 17, 2017.

Presentation to the House of Commons’ Standing Committee on Human Resources, Skills and Social Development and the Status of Persons with Disabilities

Thank you for this opportunity to present on education, training and employment strategies to reduce poverty in Canada. It is a privilege to be able to share our experience and our insights.

I’d like to begin with a story of poverty, survival, resilience and transformation.

Abdul Ali came to Canada full of dreams for a brighter and safer future for himself and his family. He believed that his Master’s degree in accounting, flawless English and years of experience in senior management positions at a multinational oil company would serve him well. After sending out hundreds of job applications without success and using up his savings to settle his family, Abdul did what so many immigrants to Canada are forced to do – he took a minimum wage survival job as a clerk at a convenience store to put food on the table for his family of four.

Abdul’s story is a common one. Despite the fact that Canada actively recruits skilled immigrants for the contributions that they and their families can make to our economy and future, we have not created the conditions that allow them to thrive. Despite their average higher levels of education, they face higher unemployment rates and lower wages than Canadian born workers, and are disproportionally represented in Canadian poverty statistics.

See A Snapshot of Racialized Poverty in Canada for more insights.

You have met them. They are the taxi drivers who drive you to airports, the clerks in grocery stores, and the cleaners and security guards in office towers across Canada. This is preventable poverty, devastating to the families who experience it who arrive on our shores expecting so much more, and a huge loss to Canada’s economy and all of us as Canadians. It is estimated that if immigrants’ observable skills were rewarded in a manner similar to Canadian born workers, the increase in incomes would amount to $30.7 billion, or about 2.1 % of GDP. (1)

It is imperative that the Government of Canada provide leadership in redressing this situation.

So why does it happen? There are several complex and mostly systemic reasons:

What is Immigrant Access Fund and how do we fit into this picture?

Immigrant Access Fund is one of those social innovations made possible when governments, communities and the private sector come together to make a difference. IAF is a unique character-based microloan program that lends up to $10,000 to immigrants across Canada to enable them to return to work in the occupations that they trained for and worked in prior to their arrival.

Immigrants can use our funds for whatever will help them on this challenging “get out of poverty” journey. Since our start in 2005, we have lent over $17 million to 2,700 newcomers.

What Makes Us Unique?

What difference does IAF make in reducing poverty?

So what are our recommendations to you?

So we started with Abdul and I would like to go back to him. I promised you a transformational story and his is truly that. Abdul borrowed $3,200 from IAF to begin the process of getting his accounting designation in Canada. By the time he had completed 2 courses, he was hired by a company in Calgary with a starting wage of $40/hour. But it is Abdul’s profound words that stay with us until today. “When I came home with that first pay cheque that reflected my years of education and experience and the dreams and hopes that had brought me to Canada—a pay cheque that meant my family’s struggles with poverty were over—my wife and my children cried.”