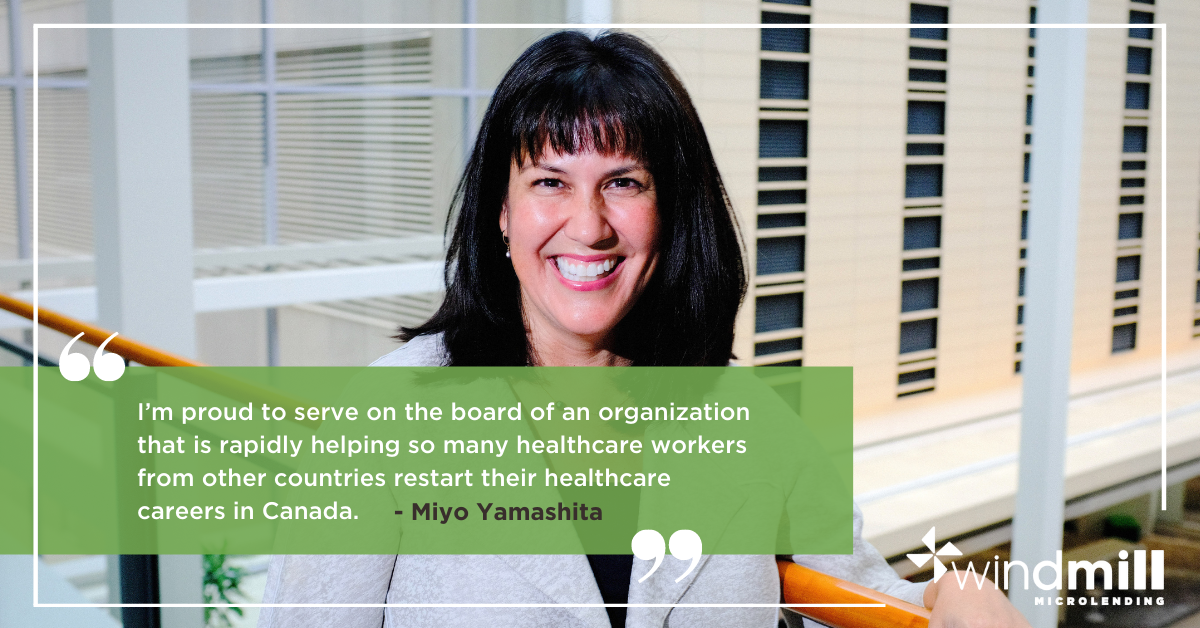 On October 5th, Mina Demian from Windmill Microlending sat down with Miyo Yamashita to understand what makes her tick.

Windmill: Miyo, you’ve had an impressive career. You have served as Chief of Staff to the Managing Partner and Chief Executive of Deloitte; you were Deloitte Canada’s first Chief Transformation Officer and the Managing Partner of Talent & Workplace; and now have just taken on the role of Director, Strategy and Operations for the Schwartz Reisman Institute for Technology and Society at UofT. What is one thing you’ve learned over the years that has helped you navigate your way to success as an Asian-Canadian female?

Miyo Yamashita: Listening to your question, I think I’ve learned that I’ve clearly worked for some great organizations that also seem to favour very long job titles! Seriously, however, the one thing I’ve learned is that you never succeed on your own. I’ve been really fortunate in my career, having served in several roles spanning multiple industries with really interesting, complex problems to solve on behalf of those organizations. Through that, I’ve seen consistently that a diversity of experiences and perspectives is critical for solving challenging, multi-dimensional problems. I’ve always looked for the brightest, most creative people I can find to work with, and I don’t think that comes with a specific type of background or demographic characteristics; rather, it comes with an open mindset and willingness to try new things and to keep learning and growing. I’ve always had the opportunity to work with amazing people, and I have learned more from them than they have from me.


You asked specifically about my experience as an Asian Canadian. This isn’t unique to Asian-Canadian families, of course, or to any particular group, but I grew up in a family where education was highly valued. Both my parents grew up poor. They met in Winnipeg after the Second World War. My father, in particular, grew up very poor because his family had just been displaced from an internment camp in British Columbia set up to house Japanese Canadians, who were declared “enemy aliens” in the war. And so when the war ended, education became the way out of poverty for my father. I believe education can create and accelerate opportunities for all Canadians.  And ultimately, it was a big reason why I wanted to be a part of Windmill.

Windmill: You’re currently a Director at Windmill Microlending, but you also serve as Chief Inclusion Officer for Ascend Canada. Why is diversity and inclusion vital, and how does diversity help companies achieve success?

Diversity and inclusion have a fundamental human rights component, but more attractive to most business leaders is usually its economic impact. For the type of problems most businesses face in this current economic climate, you need to have as many ideas on the table as you can, and everyone has ideas, and all ideas should be welcomed! If you’re always hearing from the same sets of people demographically, the chances of having a broader perspective are pretty low, in my experience.

As for me, I like learning things from people whose backgrounds and views are different from mine. I just find that amazing. It’s personally invigorating to me as a leader. I think many things can feel threatening in business – your competition, activist shareholders, a bad news story in the media, for example – but being threatened by people’s diversity is something I have never really understood.

From a business case perspective, the argument for diversity is also clear.  For example, the Boston Consulting Group (BCG) has published very interesting articles about the link between diversity and innovation. Other firms have produced really important work too.

Windmill: Why did you first get involved with Windmill Microlending, and what advice would you give to other supporters who want to make a lasting impact in their communities and the Canadian economy?

Miyo Yamashita: I’ve been involved with charitable giving and volunteerism throughout most of my career. And I was always happy to give and to be involved, but I never really had a deep personal connection with some of the other larger charitable organizations. I can absolutely understand why there is a need for all the charities we have in Canada, but with Windmill, I immediately connected with the individual stories of many of our loan recipients. I also really connected with our CEO, Claudia Hepburn, and the team she has built. I wanted to do everything I could to help this incredible team that is helping so many incredible new Canadians.

Windmill is at the crossroads of so many important issues for our country. For example, immigration is critical to meeting labour market shortages. Today, there are four working Canadians on average for every one retired person in this country. But by 2030, that ratio will shift from 2:1, unless immigration dramatically increases.  And, of course, healthcare is on everyone’s mind these days with COVID-19. I’m proud to serve on the Board of an organization that is rapidly helping so many healthcare workers from other countries restart their healthcare careers in Canada. Finally, I believe that helping to improve the economic circumstances of new immigrants and refugees from minority communities is critical to building a more equitable and inclusive country.  So, for anyone wanting to invest their charitable dollars or time into something that is relevant on so many dimensions in today’s world, for me, Windmill is a great choice.

At board meetings, we start every session with a story of personal impact for a loan recipient, which I find really inspiring. Just before the global pandemic hit, we also hosted an event where Prem Watsa spoke. Many new immigrants attended, and of course, everyone had questions for Mr. Watsa about his own immigration experience and his incredible career. Mr. Watsa answered every single question, from every single person who put up their hand, staying late into the evening.

Many other charitable events I’ve participated in are so tightly-timed and feel quite orchestrated, but there is a real freshness to Windmill and a natural momentum that is just continuing to build, which is tough to achieve in this current fiscal environment. This kind of success speaks a lot to the champions of immigration around Windmill, like Mr. Watsa, and to all of Windmill’s staff. It’s a very special organization.

Many private and public sector organizations are struggling to grow right now. Windmill is one of the only charitable organizations that I know of that is in high growth mode. I would describe the people that I meet at and around Windmill as totally ego-less. They are there to understand the issues, help in any way they can, and to keep learning and growing themselves. There is no sense of a “club” around Windmill, and perhaps this is one of the many reasons why people want to continue to be involved and to support this amazing organization.